Leeds United have opened contract talks with England midfielder Kalvin Phillips in a bid not to lose the 25-year-old to rivals Manchester United. (Star)

And Spurs are also said to be ready to let England midfielder Harry Winks, 25, leave the club when the January transfer window opens. (Caughtoffside)

Barcelona and Netherlands midfielder Frenkie de Jong, 24, says he does not believe sacking manager Ronald Koeman “can solve anything” at the struggling Spanish club. (Goal)

Chelsea are considering bringing Villarreal defender Pau Torres, 24, to the club. Manchester United were also interested in the Spaniard. (90min)

England midfielder Declan Rice says he is happy at West Ham and can achieve his aims at the club. The 22-year-old has been linked with Chelsea and Manchester United. (Sky Sports)

Inter Milan are not interested in signing Arsenal and Germany goalkeeper Bernd Leno, 29. The Serie A side want 25-year-old Cameroon international Andre Onana of Ajax instead. (Fabrizio Romano via Twitter)

Leno believes that the reasons for his recent omission from the Gunners starting line-up are not performance related and he is looking for a move away in January. (Bild via Mirror)

France centre-back Jules Kounde says he is focused on Sevilla after Chelsea’s failed bid to sign the 22-year-old during the summer. (Star)

Everton are keeping an eye on Roma midfielder Gonzalo Villar as the 23-year-old Spaniard does not appear to be in manager Jose Mourinho’s plans for the club. (Fichajes – in Spanish)

Manchester United manager Ole Gunnar Solskjaer has admitted that English attacking midfielder Jesse Lingard, 28, is unhappy at the club because of his lack of playing time. (Metro)

Italy forward Lorenzo Insigne says “there’s time to discuss” a new contract with Napoli, despite the 30-year-old’s current deal with the Serie A club running out next summer. (Sky Sport Italia, via Mail)

Italy defender Leonardo Bonucci, 34, says he came close to joining Manchester City in 2016 and also spoke to the the Etihad club’s manager, Pep Guardiola, last year but opted to stay at Juventus. (Athletic, via Goal) 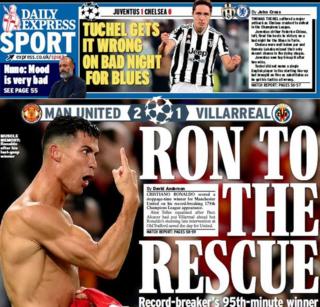