Germany and Chelsea defender Antonio Rudiger, 28, says he does not allow himself to get distracted by rumours linking him to the likes of Bayern Munich. (Mirror)

With Rudiger’s contract due to expire next summer, Chelsea boss Thomas Tuchel is keen for the centre-back to sign a new deal, with rivals Tottenham interested in signing him for free. (Express)

PSG sporting director Leonardo has accused Real Madrid of a lack of respect in their pursuit of Mbappe. (L’Equipe, via Mirror)

Fiorentina say 21-year-old Serbia striker Dusan Vlahovic, linked with Arsenal and Tottenham, has not accepted a new contract with the Serie A club. (Evening Standard)

Liverpool are still interested in Torino defender Bremer, 24, but have been joined by Manchester United and Manchester City in the pursuit of the Brazilian. (Calciomercato via TeamTalk)

Red Bull Salzburg want between £25m and £34m for 19-year-old Germany striker Karim Adeyemi, who is a target for Liverpool and Bayern Munich. (Sky Germany – in German)

Manchester United are looking at signing a right-back in January, with 19-year-old Rangers and Scotland defender Nathan Patterson and Norwich City’s English full-back Max Aarons, 21, on their radar. (90 Min)

England midfielder Harry Winks wants to leave Tottenham on loan during the January transfer window and the 25-year-old is open to moving abroad. (Times – subscription required)

Juventus are prepared to part with 23-year-old American midfielder Weston McKennie, who is wanted by Tottenham and West Ham. (TeamTalk)

Ajax and Cameroon goalkeeper Andre Onana, 25, is ready to join Inter Milan as a free agent in 2022. (Fabrizio Romano)

Bernd Leno, 29, is in danger of becoming Germany’s second-choice goalkeeper, which would make his exit from Arsenal in January look more likely. (Fussball.News, via Star)

Netherlands international Memphis Depay, 27, has insisted he does not regret joining Barcelona from Lyon in the summer, despite the Spanish club’s struggles on and off the pitch. (ESPN, via Mirror) 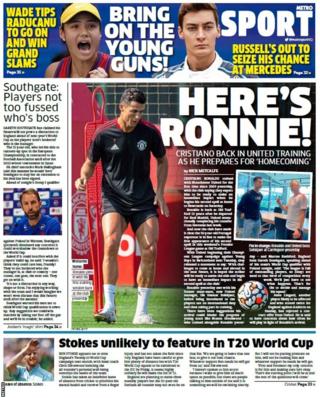 Uefa games not monitored for racism this season ...

Callum Robinson says he is not vaccinated despite ...