Chelsea maintained their place at the top of the Premier League by edging Brentford 1-0 on Saturday.

Second-place Liverpool put in a superb performance as they won 5-0 at Watford while Manchester City beat Burnley 2-0.

Late goals gave Leicester City a 4-2 victory against Manchester United while Wolves fought back to edge a thriller with Aston Villa 3-2.

Check out my team of the week and then make your own selections towards the bottom of the article. 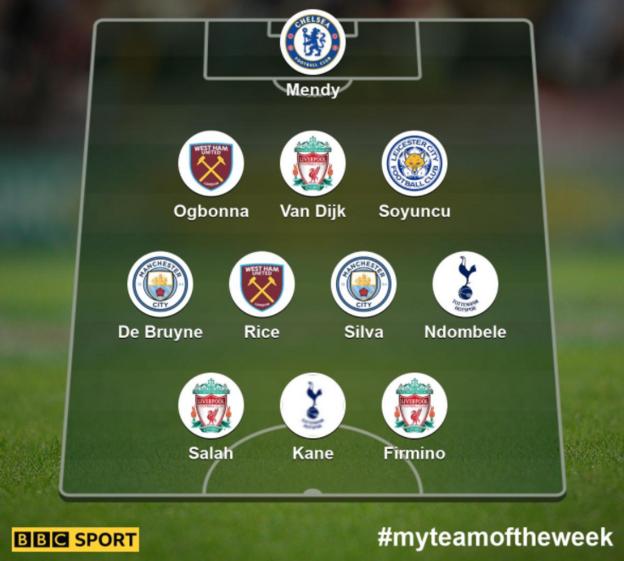 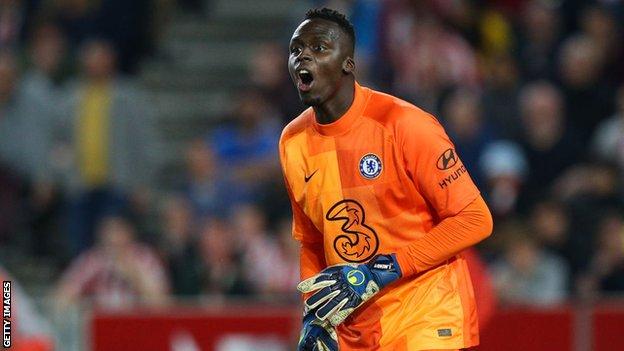 Edouard Mendy: The days when goalkeepers are expected to put their bodies on the line week in week out have long gone. They do their job and go home. Edouard Mendy on the other hand had the ball smashed in his face in a way that would have knocked mere mortals out cold. The Senegal international simply shook his head, sprung to his feet and went on to make a number of fantastic saves. The tip over the bar from Christian Norgaard’s overhead kick was quite magnificent.

Brentford’s manager Thomas Frank said in his post-match interview that he thought Chelsea were lucky. No, Mendy was outstanding.

Did you know? Edouard Mendy has now prevented more than three goals with his saves in the Premier League this season, based on the expected goals on target model – that’s more than any other keeper in the competition. 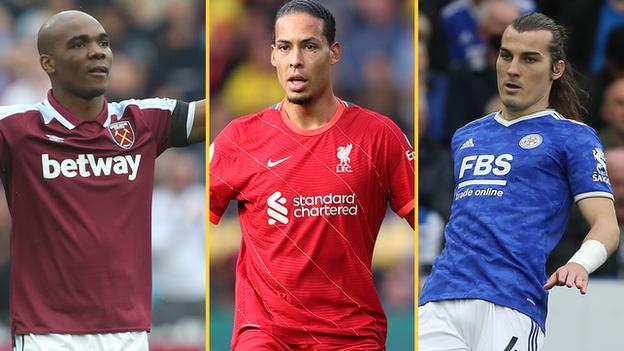 Angelo Ogbonna This was an impressive performance by any standard away from home by West Ham. The Hammers seem to have found an extra layer of confidence since last season. What was also impressive about this victory was their defensive unit, especially the partnership between Angelo Ogbonna and Kurt Zouma. They looked impenetrable at times against Everton.

To be perfectly honest I didn’t think Zouma would work out quite as well as he has, bearing in mind I gave him a massive build up after his debut for Chelsea at Stamford Bridge. However it is Ogbonna who has grown into a top-class Premier League defender and Zouma would do well to stick closely to him.

Did you know? All eight of West Ham defender Ogbonna’s Premier League goals have come from set pieces, including seven from corners (one free-kick). All eight have also been scored against a different opponent.

Virgil van Dijk: Make no mistake, this was a masterclass by Liverpool’s red arrows. Roberto Firmino, Mohamed Salah and Sadio Mane were not just back to their attacking best but had the sort of collaboration that won them the title two seasons ago. What’s more, Virgil van Dijk looks as imperious as ever. I must say Joel Matip looked impressive too, alongside him.

As for Watford, they got what they deserved. Any club who can dismiss their managers with such regularity can’t expect any sympathy from me.

Did you know? Virgil van Dijk made more clearances (two) and contested more aerial duels (six) than any other player, while no defender recovered possession more often than the Netherlands centre-back (eight). Only against Manchester City and Norwich (seven) did he complete more long passes than he did against Watford (six) in Premier League games this season.

Caglar Soyuncu: It takes a lot of courage to make five changes against a team like Manchester United, but it didn’t seem to make a scrap of difference to a Leicester side full of grit, determination and an awful lot of ability. Manchester United’s star-studded team, on the other hand, just lacked grit.

Caglar Soyuncu clearly doesn’t get phased by stardom. In fact, the better the opposition the better he seems to perform. This is the second time I’ve seen the Turkey centre-back score against a United side expected to win but who failed turn up.

Ole Gunnar Solskjaer has a problem. It would take Sir Alex Ferguson with all his managerial prowess to get the best out of this group of superstars – and Solskjaer is no Ferguson.

Did you know? Two of Soyuncu’s three Premier League goals have come against Manchester United, with the Turkey defender netting in back-to-back matches against the Red Devils. 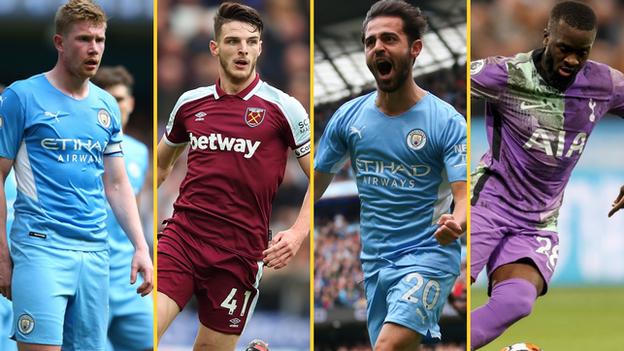 Kevin de Bruyne: I don’t think Kevin de Bruyne is playing the best football I’ve ever seen from him but when you can strike the ball as well as he can, with either foot, you don’t have to be brilliant every week. The game was over for Burnley the moment De Bruyne stepped inside and struck the ball with his left boot. The Belgium midfielder didn’t even have to look at the target.

De Bruyne has been in that position so many times in his career he knows exactly where the goal is and has the ability and composure to execute the skill. The goal, like the strike, was wonderful. A bit like De Bruyne on an off day.

Did you know? Kevin de Bruyne scored in consecutive Premier League appearances in a single season for the first time since July 2020.

Declan Rice: If ever there was a player to take over the captaincy of West Ham from Mark Noble then Declan Rice was that player. He gets better with every game. He seems to cover more ground than anyone in his team and you can guarantee 100% effort every week. No doubt that’s precisely what David Moyes and England manager Gareth Southgate think of him. Rice showed all of those redeeming qualities against Everton.

West Ham fans won’t like me for saying this but how long can the East London club hold onto him? This lad should be playing Champions League football. It’s only a matter of time.

Did you know? Declan Rice completed more passes (71) than any other player on the pitch during West Ham’s 1-0 win over Everton, while he was the only Hammers player to make more than one block (two).

Bernardo Silva: This lad is having a wonderful start to the season, which is just as well as De Bruyne and Raheem Sterling are slightly off the boil. Regardless, Manchester City don’t seem to be suffering too much. Portugal playmaker Silva simply ran the show against a Burnley side that, had they taken their chances, might have come away with a point.

As for Sterling, unlike De Bruyne, he’s lost some of his confidence when playing for City – yet not for England. I have sensed for some time now that the relationship between Pep Guardiola and Sterling is not what it was.

Maybe it is time for Sterling to leave. The question is, where?

Did you know? Only Riyad Mahrez (four) had more shots than Bernardo Silva (three) in the game with Burnley while, along with the opening goal, no player created more chances than the Portugal midfielder (three).

Tanguy Ndombele: The victory against Newcastle was worryingly easy for Tottenham and provides a clear insight into the task facing the new owners at St James’ Park. The scoreline is irrelevant – it was Newcastle’s performance I found so concerning.

The atmosphere in the stadium was amazing and the Magpies couldn’t have had a better start. However, the longer the game went on the more Spurs took control and the more Newcastle were found wanting. Tanguy Ndombele scored a superb equaliser and stood out in midfield but that was because no-one offered any real resistance. Newcastle were torn to shreds by a Tottenham side who for once were in the mood.

Read more about what I think about the Newcastle takeover in the ‘Crooks of the Matter’ below.

Did you know? Each of Tanguy Ndombele’s last eight goals for Spurs have come away from home, while he managed five shots against Newcastle – the outright most he’s ever had in a Premier League game. 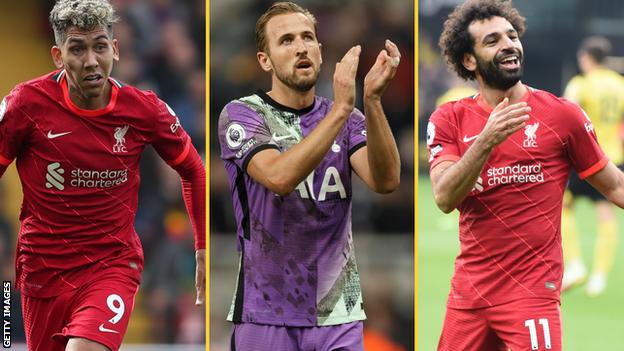 Roberto Firmino: It is not often someone scores a hat-trick in the Premier League and isn’t named man of the match. However, that’s what happened to Roberto Firmino. The Brazil forward was in blistering form against Watford but not in the same class as Salah. Firmino won’t give two hoots about who was considered the best man on the pitch but he will care about the hat-trick. He is back among the goals and Liverpool are second in the table.

Did you know? Roberto Firmino is the first Brazilian to score more than one hat-trick in the Premier League, with the Liverpool forward also bagging three against Arsenal in December 2018.

Harry Kane: How nice to see Harry Kane playing like a centre-forward again and not like an attacking midfield player. His goal against Newcastle in a cauldron of flag-waving Geordies was exactly why he must not only lead the line but always be available to hit.

It has taken Kane a long time to return to what he previously was in a Tottenham shirt. Gross mismanagement of a transfer that really should have taken place has clearly taken its toll on the player. However, all that now seems like a bad dream and the England captain looks like he’s enjoying his club football again. His return to form was very unfortunate timing for Newcastle and their new owners as they were hoping for a positive result and a party to follow.

Did you know? Only Wayne Rooney (94) has scored more away goals in Premier League history than Harry Kane (88), who netted his fifth goal in his last three visits to St James’ Park.

Mohamed Salah: The ball from Salah for Sadio Mane which produced Liverpool’s opening goal against a totally outclassed Watford had me applauding in front of the television. Why Danny Rose wants to go toe-to-toe with Salah and not insist that at least one of his team-mates provides him with some assistance on that side I don’t know. Didn’t Rose see Salah take four world-class defenders apart against Manchester City and finish with frightening composure?

As for Craig Cathcart, he needed a ticket to get back in the ground after Salah had dumped him on his backside and left him sliding towards the touchline before finishing a glorious solo effort. Salah is simply unplayable at the moment.

Did you know? Mohamed Salah has scored in each of his last eight games for Liverpool in all competitions; the longest run of scoring in consecutive appearances for the club since Daniel Sturridge in February 2014 (eight).

The Crooks of the Matter

On Friday, new part-owner Amanda Staveley confirmed that Steve Bruce would stay in charge for Newcastle’s Premier League game against Tottenham after PIF had taken over the club from Mike Ashley. How very nice of her considering Bruce was at Newcastle long before she arrived at St James’ Park and is the man responsible for keeping the club in the top division that meant she and her colleagues found it sufficiently attractive to buy.

Allowing Bruce to take charge of Newcastle for his 1000th match was the least she could do. He was, after all, born and bred in the area and, through no fault of his own, suddenly finds his career at the club thrown in the balance by the takeover. Staveley might have to stay with Bruce a little longer, after Brendan Rodgers and Rafael Benitez said they would not be leaving their managerial posts any time soon.

A win against Tottenham was a must and it may have bought the manager some time but the moment he or his team falters, his doubters and knockers, and he has many, will want him gone – and no-one can survive long in those conditions. That is why Bruce will not be taking his beloved Newcastle into the ‘big time’.

The sooner the club stops this awful pretence by providing the slightest hint he is anything other than a ‘caretaker manager’ the better for all concerned. Come clean and put him out of his misery. It’s the least he deserves and the best for all concerned.

Fan ‘stable’ after Newcastle-Tottenham game halted because of ...