Real Madrid striker Karim Benzema has gone on trial in France accused of complicity in an attempt to blackmail fellow footballer Mathieu Valbuena over a sex tape found on his phone.

He has ridiculed the charge against him as a “masquerade” and did not appear at the court in Versailles.

The case dates back to June 2015, when the two footballers were at a France training camp.

The saga rocked French football and both players lost their team places.

Karim Benzema, 33, has since returned to the France team and scored in Real Madrid’s victory in Kyiv on Tuesday in the Uefa Champions League.

He is on trial with four other men accused of trying to blackmail Mr Valbuena, who told the court on Wednesday that football was his life.

“I knew if that video got out it would make things difficult with the French team,” he said. 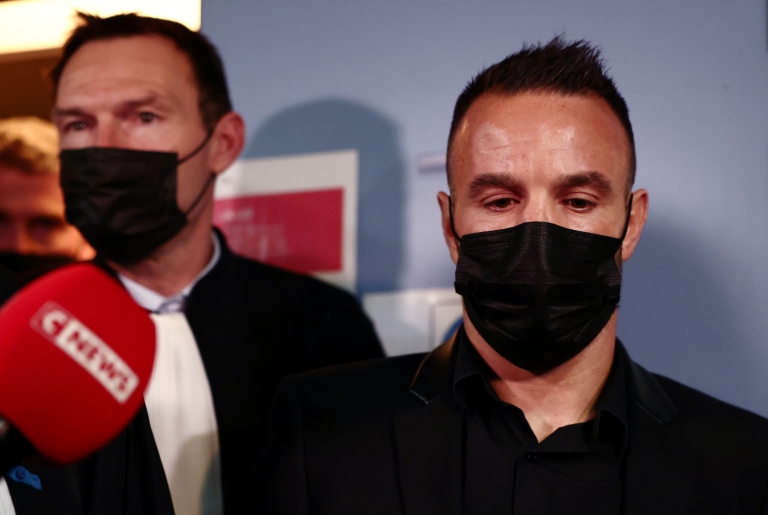 I see everyone is here – almost. Karim isn’t, which is a shame. But we’ll go all the way: this has gone on for six years and we’re here for as long as it takes to put it behind me

The sex tape case began in 2015 when Mr Valbuena, now 37, asked a man in Marseille, Axel Angot, to upload the contents of his mobile phone to a new device.

Mr Angot found sexually explicit material on the phone, and he and another defendant in the trial, Mustapha Zouaoui, are then accused of trying to blackmail Mr Valbuena by threatening to make the tape public.

Mr Zouaoui told reporters he had shared the tape, but there had never been an attempt to extort money.

Mathieu Valbuena described being approached by another defendant, Younes Houass, who then told the court the player was acting as if nothing was wrong and he had warned him of the seriousness of the issue, without asking for money.

When the footballer went to the police, an undercover agent named Luka was given the task of negotiating on his behalf.

The defendants are accused of approaching a childhood friend of Mr Benzema called Karim Zenati.

Then in October 2015 the Real Madrid striker approached his fellow France player in his room at the national team’s training camp.

Mr Benzema said he had merely tried to help his team-mate get rid of the compromising video, warning him: “Be careful, Math, they’re big, big thugs.”

He then offered to put him touch with someone he could trust – his childhood friend, Mr Zenati.

Police were by now tapping their phone calls and recorded Mr Benzema telling his childhood friend: “He’s not taking us seriously.”

Mr Zenati is said to have replied: “We’re here to sort it out; if he doesn’t want that he’ll have to deal with the piranhas.”

Meanwhile, Mr Valbuena is said to have already told his family about the footage on his phone.

Giving evidence at the start of the trial, Mathieu Valbuena said he had never considered handing over money to stop the video getting out.

The defence lawyers have already argued that police were wrong to use an undercover agent and that the agent pushed the defendants to demand money. But French courts threw out the lawyers’ objections to police methods in 2018.

The trial will continue until the end of the week, with four defendants facing charges of attempted blackmail and Karim Benzema accused of complicity.

More on this story

Newcastle United: Who are some of the contenders ...