Women’s FA Cup semi-final: Will it be another Man City v Chelsea ‘epic’ and will Arsenal feel pressure?

Women’s FA Cup semi-final: Will it be another Man City v Chelsea ‘epic’ and will Arsenal feel pressure? 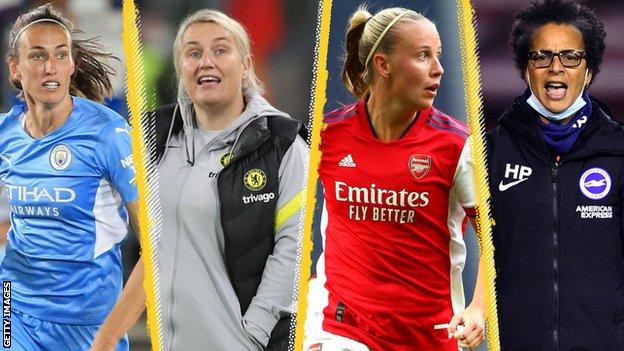 Last season’s FA Cup semi-finals are finally here but not even the postponement of the competition because of the pandemic can keep old foes Manchester City and Chelsea apart, while Brighton take on 14-time winners Arsenal.

Holders City have won three of the past four finals and meet Chelsea at the semi-final stage of the competition for the fifth time in seven years.

Between City, Chelsea and the Gunners, the three clubs have won all of the past eight Women’s FA Cups.

Brighton are the only side left not to have won the trophy and Seagulls boss Hope Powell says the “pressure is definitely” on Arsenal to get past them – and onto the delayed final at Wembley on Sunday 5 December.

BBC Sport takes a look at the talking points ahead of Sunday’s semi-finals, both of which will be shown live on the BBC.

The tie is one Chelsea boss Emma Hayes “knows the draw” will inevitably produce.

The 45-year-old says it is no longer a game that “surprises” her, but it is one she has come to “love”.

Asked if the regular meetings have helped drive Chelsea to improve, Hayes added: “There is no doubt about that, 100%.

“I always love these games against City, they are always epic.

“I know the two clubs are developing everything around the team to set them up to be top teams in Europe and I’ve always enjoyed the battles we have had with them.”

“I don’t underestimate them,” she said.

City’s injury woes have been compounded further with back-up keeper Khiara Keating out with a fractured elbow, forcing City boss Gareth Taylor to call up a development player for the semi-final.

“It is a big challenge, we are fully aware of the situation, but what we have got is resolve” said Taylor, who hopes to have Vicky Losada and Hayley Raso back as they bid for a third final in three years.

“There have been a lot of positives outside of some negative results. This is a great opportunity for us to look at another competition, one that we have been successful in previously. We have worked really hard to get to this stage and we want to get to the final.”

‘Who says Arsenal have the right to win?’

Women’s Super League leaders Arsenal are yet to lose a domestic match under head coach Jonas Eidevall since he took charge in the summer.

Now just 12 games into his tenure, the club’s Swedish boss is one win away from achieving “a goal and mission” to have the Gunners challenge for trophy at Wembley.

“I am new to English football but watched it [FA Cup] for many years overseas and I understand it has so much tradition and is filled with so much pride,” he said.

“We are only one game away from that and that is an amazing feeling.”

Arsenal have to try reach the final without Netherlands striker Vivianne Miedema who has been given extra time to rest after the international break.

Brighton boss Powell says the club’s first Women’s FA Cup semi-final appearance for 45 years is something they should “enjoy” and that they will go out “to have a good time and see what happens”.

“The pressure is definitely on Arsenal,” she added.

“The expectation is for them to win, but they don’t have the right to win. You still have to play the game.

“We beat them in the Conti [League] Cup a few years ago and we have beaten some bigger teams that we have not been expected to beat.

“We know Arsenal are flying, we understand the depth of their squad and we recognise that it will be tough, but every game in the WSL is tough so it’s nothing we haven’t experienced before.”

Eidevall accepts the Gunners are under pressure as it is “one game that can fulfil a dream for you”, but said Brighton are in the same position.

“They will also feel a lot of pressure and that it is a big opportunity for them as well,” he added.

“I couldn’t care less what other people think. I care only about what I’m thinking and what my expectations are and what my pressure is. Yes, I want to win that game and I’m sure she wants the same.”