Real Madrid will insert a 1bn euro release clause when they renew the contract of Brazil forward Vinicius Jr, 21, at the end of the season. (AS in Spanish)

Manchester United have former RB Leipzig coach Ralf Rangnick on their list of candidates if they sack Ole Gunner Solskjaer and the German is interested in taking over at Old Trafford. (Christian Falk, Bild Sport head of football)

Newcastle United’s move to appoint Eddie Howe as their new boss has stalled after they failed to reach an agreement with Jason Tindall to be his number two. (90 Min)

Tottenham boss Antonio Conte has been linked with returning to former club Inter Milan to sign some of their players but the Serie A club’s manager Simone Inzaghi says “it’s too early to think about January”. (Football Italia)

Frank Lampard has emerged as the early favourite to replace Daniel Farke as Norwich City manager, with Steven Gerrard, Roy Hodgson and Lucien Favre also among the contenders. (Mail)

Real Sociedad and Spain midfielder Mikel Merino, 25, is an option Liverpool are considering in order to strengthen their midfield next summer, with Borussia Dortmund and England’s Jude Bellingham, 18, appearing too expensive for the Reds. (Fichajes.net – in Spanish)

Everton manager Rafael Benitez has played down the chances of a spending spree in January. (Times – subscription required)

Juventus could make a move for Borussia Dortmund and Belgium midfielder Alex Witsel, 32, in the January transfer window. (Bild, via 90 Min)

Napoli president Aurelio de Laurentiis says it is up to Italy forward Lorenzo Insigne if he stays at the Serie A club, with the 30-year-old’s contract running out next summer. (Calciomercato) 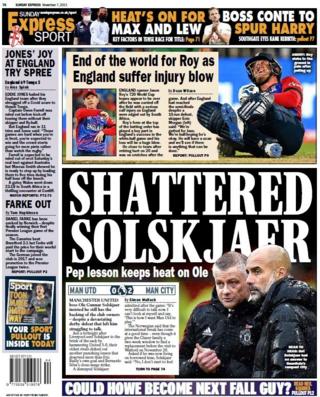 The back page of the Sunday Express

Manchester United ‘not at same level’ as Manchester ...