Paul Pogba wants to renew his contract with Manchester United but the 28-year-old France midfielder is demanding he overtakes Cristiano Ronaldo to become the Premier League’s highest-paid player. (L’Equipe, via Metro)

Six-time Ballon d’Or winner Lionel Messi, 34, could be set for a move back to Barcelona despite the Argentina forward having only quit the La Liga giants for Paris St-Germain three months ago. (Star)

Leicester City manager Brendan Rodgers, who has been linked with replacing Ole Gunnar Solskjaer at Manchester United, is believed to have a release clause in his contract that allows him to leave if a club in the Champions League makes a move for him. (Star)

Newcastle are eyeing up a move for Juventus’ France midfielder Adrien Rabiot, 26, in the January transfer window. (Calciomercato, via Mirror)

But Newcastle may find it difficult to buy or loan players from Premier League clubs in January because some top-flight teams do not want to do business with them. (Telegraph – subscription required)

England keeper Dean Henderson, 24, wants to leave Manchester United at the end of the season if he cannot overtake Spain stopper David de Gea, 31, as the first choice at Old Trafford. (Mail)

Liverpool are lining up a triple January transfer swoop to cover for Mohamed Salah, Sadio Mane and Naby Keita when the trio head off to the Africa Cup of Nations, with Inter Milan’s Croatia midfielder Marcelo Brozovic, 28, among those being considered. (Star)

Super-agent Jorge Mendes is wooing Fulham’s 19-year-old England youth international midfielder Fabio Carvalho and is trying to fix him up with a move to Liverpool. (Mail)

Denmark defender Andreas Christensen, 25, has told Chelsea fans not to worry about his future despite his contract expiring in the summer. (Standard)

Christensen’s Chelsea future hinges on whether or not an impasse over the terms and length of his proposed new contract can be broken. (Telegraph – subscription required)

Juventus have offered Wales midfielder Aaron Ramsey, 30, to fellow Serie A side Roma on loan. (Calciomercatio – in Italian) 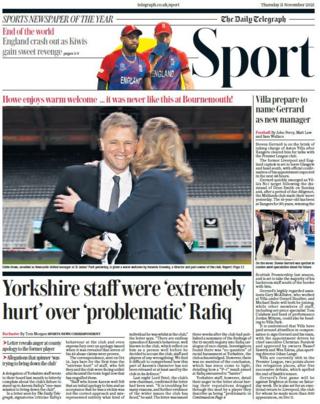 Back page of the Telegraph

World Cup quiz: Can you name the global ...