Manchester City are willing to sell forward Raheem Sterling and value the 26-year-old England international at about £45m. (Metro)

Arsenal have been given a boost in their quest to sign the England winger with Barcelona reportedly stopping their preparations for the transfer. (Express)

New Barcelona boss Xavi will have less than €10m (£8.6m) to spend on strengthening his squad in January. (ESPN)

Tottenham are not planning a move for Wales and Real Madrid winger Gareth Bale, despite reports linking the 32-year-old with a return to north London. (Football London)

Roma manager Jose Mourinho is interested in signing Manchester United full-back Diogo Dalot in January, a player he bought during his time at Old Trafford. The 22-year-old Portuguese defender has struggled to establish himself at the Red Devils since arriving in 2018. (Calciomercato – via Mirror)

Arsenal are also looking at Kulusevski, who has been out of favour at Juventus this season. (Sky Italy – in Italian)

French midfielder Matteo Guendouzi, 22, wants to stay at Marseille when his loan from Arsenal ends. (RMC, via Mirror)

Monaco midfielder Aurelien Tchouameni has been linked with a move to Manchester United. The 21-year-old France midfielder has made 20 appearances this season. (Express)

Fiorentina striker Dusan Vlahovic is being monitored by a number of Premier League clubs with Arsenal, Tottenham and Liverpool all interested in signing the 21-year-old Serbia forward. (Talksport)

German midfielder Mesut Ozil, 33, has been told to focus on football rather than “commercial interests” by Fenerbahce president Ali Koc. (Fenerbache TV, via Goal)

Barcelona will not be re-signing 38-year-old Brazilian right-back Dani Alves, who is a free agent and was linked with the club. (Goal) 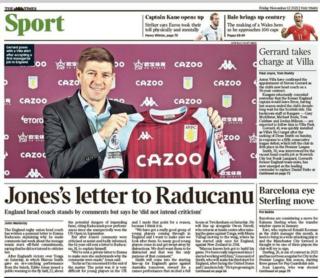