AC Milan striker Zlatan Ibrahimovic looks set to extend his stay at the Serie A club. The 40-year-old Swede, who re-joined the club in January last year, is out of contract in the summer but will sign a new contract until June 2023. (Football Italia)

Tottenham manager Antonio Conte is interested in Everton’s England goalkeeper Jordan Pickford, 27. The Italian is said to be lining up a replacement for 35-year-old Frenchman Hugo Lloris, who is in the final year of his contract at Spurs. (Mirror)

Spurs are also interested in Bayern Munich and France midfielder Corentin Tolisso but could face competition from Internazionale for the 27-year-old. (Kicker – in German)

Chelsea are planning a move for 17-year-old Barcelona midfielder Gavi. The Spaniard, whose contract runs until the summer of 2023, has a release clause of £42m with Chelsea looking to make a move. (Sun)

Arsenal are only willing to offer French striker Alexandre Lacazette, 30, a short-term contract to keep him at the club for another season. (Athletic – subscription required)

Newcastle United have received a boost in their pursuit of Bayern Munich defender Niklas Sule. The 26-year-old German wants to leave the Bundesliga side and is out of contract at the end of the season. (Bild, via Sun) 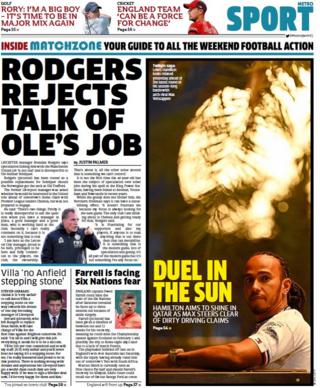 The back page of Friday’s Metro