Everton chairman Bill Kenwright has called an emergency board meeting, with the future of boss Rafael Benitez set to be discussed. (Mirror)

Liverpool are interested in signing Lille’s Portugal midfielder Renato Sanches, 24, who is valued at around £34m. (Fichajes – in Spanish)

Lille’s Canada forward Jonathan David, 21, is on Arsenal’s radar. The Gunners have been linked with Everton‘s England forward Dominic Calvert-Lewin but David – leading scorer in Ligue 1 – also fits the profile the Gunners are after. (London Evening Standard)

Everton are weighing up a move for Zenit St Petersburg’s Iran forward Sardar Azmoun, 26, who has previously been linked with West Ham, Tottenham and Arsenal. (90min)

Inter Milan’s Denmark midfielder Christian Eriksen, 29, is close to terminating his contract with the Italian club. Eriksen has not played since suffering a cardiac arrest at Euro 2020. (Calciomercato)

Real Madrid are convinced they will sign Paris St-Germain’s France forward Kylian Mbappe, 22, who is out of contract next summer. (AS)

Real, meanwhile, are prepared to sell Spain midfielder Isco, 29, who has won the Champions League four times during eight years at the club. (90min)

Aston Villa’s England youth midfielder Carney Chukwuemeka, 18, needs to be “realistic” and stay at the club, says former England defender Danny Mills. Chukwuemeka has made four Premier League appearances but is reported to be frustrated by a lack of playing time. (Football Insider)

Barcelona’s Netherlands midfielder Frenkie de Jong, 24, will not be leaving in January. De Jong has been linked with several clubs including Manchester City. (Sky Sport Italy)

Newcastle boss Eddie Howe says English forward Dwight Gayle, 32, is in his plans after the player was linked with a return to Championship side West Brom, where he scored 24 goals on loan in 2018-19. (Birmingham Live)

Wrexham are lining up a move for former Arsenal, West Ham and England midfielder Jack Wilshere. The 29-year-old is a free agent after leaving Bournemouth at the end of last season. (Football Insider) 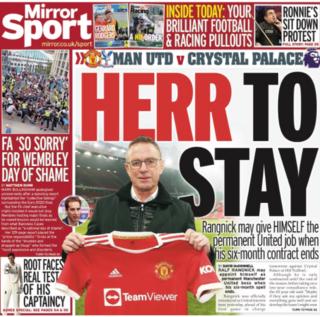 Back page of the Daily Mirror