Juventus are interested in Arsenal and Gabon striker Pierre-Emerick Aubameyang, 32, with his future at Emirates Stadium in doubt after being stripped of the captaincy. (Tuttosport – in Italian)

Leeds United are looking at signing Juventus’ Weston McKennie but it will cost about £20m to sign the 23-year-old United States midfielder. (Sun)

Manchester United striker Edinson Cavani is Barcelona’s top target for the January transfer window but Barca want assurances that the 34-year-old Uruguay forward is fully recovered from injury before committing to a deal. (Sport – in Spanish)

Manchester United are prepared to rival Chelsea in the race to sign France defender Jules Kounde, 23, from Sevilla. (AS – in Spanish)

Liverpool boss Jurgen Klopp says the club are not close to making a signing in January but, if they were, he would be reluctant to bring in a player who is not vaccinated against Covid-19. (Mirror)

Paris St-Germain sporting director Leonardo is not giving up on France star Kylian Mbappe, 22, signing a new contract despite links to Real Madrid. Mbappe can discuss a pre-contract with clubs outside France in January. (AS, via Sky Sports)

However, Barcelona manager Xavi says Gavi is “the future of the club” and that the teenager “has no ceiling”. (Marca, via 90 Min)

Newcastle have been tipped to sign Tottenham and England midfielder Dele Alli, 25, when he is made available for loan in January. (Football Insider)

Another Newcastle target, Lille and Holland defender Sven Botman, 21, is unsure about leaving the French champions in January. (90min)

Manchester City will open talks over an improved contract for 27-year-old Portugal defender Joao Cancelo in the new year. (Star)

Tottenham boss Antonio Conte has spoken to Inter Milan and Chile midfielder Arturo Vidal, 34, about joining the London club. The pair won Serie A titles during their time together at Juventus and Inter. (La Tercera – in Spanish)

Bayern Munich will join the race to sign Leeds and Brazil forward Raphinha, 24, next summer. (TodoFichajes – in Spanish)

Arsenal are interested in a deal to sign Juventus and Sweden winger Dejan Kulusevski, 21. (CalcioMercato – in Italian)

Watford are keeping tabs on Sampdoria and Gambia defender Omar Colley, 29, with Hornets boss Claudio Ranieri keen to strengthen his backline in January. (Tuttomercatoweb – in Italian) 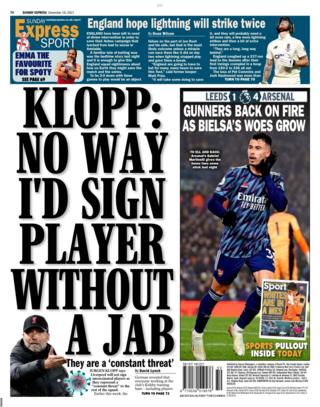