Manchester United are close to bringing highly rated French midfielder Boubacar Kamara, 22, to Old Trafford from Marseille for what would be Ralf Rangnick’s first signing as interim manager. (FourFourTwo)

Real Madrid are in talks with Antonio Rudiger in a bid to sign the 28-year-old Germany defender when his contract with Chelsea expires in June. (Rudy Galetti)

Everton have agreed a £17m deal for Dynamo Kyiv and Ukraine left-back Vitaliy Mykolenko, 22, paving the way for out-of-favour French defender Lucas Digne, 28, to leave the Toffees amid interest from Newcastle and Leicester. (The Mirror)

Everton could be offered Juventus and Brazil midfielder Arthur, 25, as part of any deal for the Italian club to sign Digne. (Sport Mediaset – via Football Transfer Tavern)

Bayern Munich and France winger Kingsley Coman, 25, who is a transfer target for Liverpool and Manchester United, is negotiating a contract extension with the Bundesliga champions. (Bild)

Newcastle have offered Lyon attacking midfielder Lucas Paqueta £181,457 per week to move to St James’ Park, which the 24-year-old Brazilian has turned down as the move would not be a ‘step up in quality’ from Lyon. (Foot Mercato – in French)

The Magpies are also interested in French striker Moussa Dembele, with Lyon open to selling the 25-year-old if a suitable offer is made for him.(Daily Mail)

Erling Braut Haaland’s agent Mino Raiola has denied claims that the 21-year-old Borussia Dortmund and Norway striker has a pre-agreement to make a move to Real Madrid in the summer. (NOS – via Fabrizio Romano on Twitter)

The transfer of Gremio full-back Vanderson to Brentford is on the verge of collapsing after Ligue 1 side AS Monaco stepped in and made a €12m offer for the 20-year-old Brazilian. (Globo Esporte – in Portuguese)

Barcelona have agreed personal terms with Ferran Torres but have not yet finalised a deal for the 21-year-old Spanish forward with Manchester City. (Fabrizio Romano)

West Ham have made an approach for Rubin Kazan and Georgia forward Khvicha Kvaratskhelia, 21. (Football Insider)

Aston Villa have made an offer for Liverpool and England defender Joe Gomez, 24. (CalcioMercato)

Juventus are eyeing a move for a striker in January with Arsenal’s Pierre-Emerick Aubameyang, 32, Manchester United’s Edinson Cavani, 34, and Paris St-Germain’s Mauro Icardi, 28, all on their shortlist. (Tuttosport) 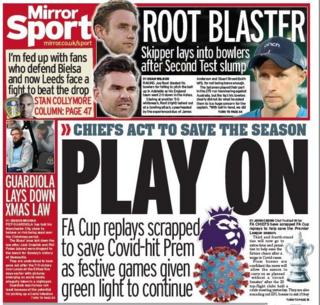 Liverpool’s Andy Robertson is ‘lucky to be walking’