Tottenham’s £54m record signing Tanguy Ndombele, the 25-year-old France midfielder, is hopeful of a move away from Spurs this month. (Athletic – subscription required)

Paris St-Germain’s France forward Kylian Mbappe, 23, could turn down a move to Real Madrid and sign a new contract with the French side. (Le Parisien – in French)

Bayer Leverkusen and Czech Republic forward Patrik Schick, 25, says he is happy at the German club despite talk of a transfer in January. (Bild – in German)

Aston Villa are in advanced negotiations to sign Everton’s 28-year-old France defender Lucas Digne, who is understood to favour a move to Steven Gerrard’s side. (Sky Sports)

Former Republic of Ireland and Newcastle goalkeeper Shay Given has advised Republic keeper Caoimhin Kelleher, 23, to leave Liverpool this month so he can get more game time. (Premier Sport via Liverpool Echo)

French striker Jean-Philippe Mateta is close to leaving Crystal Palace this month. The 24-year-old, who is on loan from German club Mainz, is set for a loan move to French side St Etienne. (Standard)

Arsenal’s Sead Kolasinac has held talks with Marseille over a free transfer in the summer. The 28-year-old Bosnia left-back is out of favour at Emirates Stadium. (L’Equipe via Sun)

Newcastle have held talks with Monaco over 20-year-old defender Benoit Badiashile. The France Under-21 international is said to be valued at £35m. (Mail)

Manchester City midfielder Tommy Doyle has ended his spell with Hamburg. The 20-year-old Englishman is set for another short-term switch away from Etihad Stadium this month. (Manchester Evening News)

Manchester United have not received an offer for France midfielder Paul Pogba. The 28-year-old is set to leave on a free transfer this summer. (Mail) 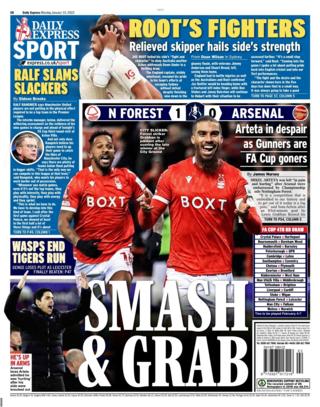