Borussia Dortmund are set to meet Norway striker Erling Braut Haaland’s representatives next week as they try to find out what the 21-year-old’s plans are regarding his future. (Marca)

Sevilla‘s interest in France striker Anthony Martial has cooled as they cannot afford to meet Manchester United’s demands to sign the 26-year-old on loan. (Marca)

Paris St-Germain midfielder Georginio Wijnaldum has been linked with Newcastle United but the 31-year-old Dutch international is not interested in a return to his former club. (Football Insider)

Former Tottenham boss Jose Mourinho has contacted Spurs midfielder Tanguy Ndombele in an effort to convince the 25-year-old France midfielder to join him at Roma, with the Italian club wanting a loan deal with an option to buy. (Telefoot, via Mail)

England striker Marcus Rashford, 24, is expected to hold talks with Manchester United over a new contract, with negotiations set to start before the end of the season. (Mail)

AC Milan are trying to sign a centre-back and Manchester United’s Eric Bailly, 27, is on their list while Paris St-Germain’s Senegal defender Abdou Diallo, 25, is an option on loan. (Fabrizio Romano)

Crystal Palace are in talks to sign English striker Eddie Nketiah from Arsenal, with the 22-year-old’s contract running out in the summer. (Times – subscription required)

Arsenal’s England youth international forward Folarin Balogun, 20, is set to join Championship side Middlesbrough on loan for the rest of the season. (Sky Sports)

Brentford and Brighton have made bids for 19-year-old Reims striker Hugo Ekitike but Newcastle remain favourites to sign the Frenchman. (90 Min)

Bournemouth plan to price any potential suitors out of a move for English defender Lloyd Kelly, with Everton and West Ham interested in the 23-year-old. (Football League World)

Chelsea are considering recalling English right-back Dujon Sterling, 22, from his season-long loan at Blackpool but only have until 14 January to do so. (Football League World)

Middlesbrough have launched a last-ditch move to beat Celtic to the signing of Australia midfielder Riley McGree, 23, from MLS side Charlotte FC. (Mail) 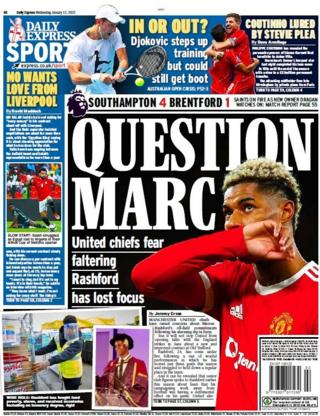 The back page of the Daily Express