Manchester City are interested in signing Uruguay centre back Ronald Araujo, 22, who has halted contract renewal talks with Barcelona. (Sport – in Spanish)

Manchester United are also preparing to make a summer bid for Araujo, whose Barcelona deal expires in 2023. (Marca – in Spanish)

United are ready to rival Bayern Munich and Barcelona in the race to sign 22-year-old Netherlands defender Matthijs de Ligt from Juventus. (Calciomercato – in Italian)

The Red Devils are planning to overhaul their midfield in the summer with West Ham‘s Declan Rice, 23, his 26-year-old England team-mate Kalvin Phillips from Leeds and RB Leipzig‘s Mali international Amadou Haidara, 24, all on the club’s extensive list of targets. (ESPN)

Chelsea failed in their latest attempt to tie Germany defender Antonio Rudiger down to a new deal despite offering the 28-year-old close to £200,000 a week amid interest from Real Madrid and Paris St-Germain. (Mail)

Barcelona are interested in signing Chelsea defender Cesar Azpilicueta on a free transfer in the summer. The 32-year-old Spaniard’s contract expires at the end of the season. (Mundo Deportivo – in Spanish)

Adana Demirspor president Murat Sancak claims the club had agreed to sign Dele Alli on loan from Tottenham before the 25-year-old English midfielder joined Everton on a two-and-a-half-year deal. (Milliyet – in Turkish)

Liverpool and Manchester City could move for 20-year-old England winger Bukayo Saka if Arsenal fail to qualify for next season’s Champions League. (ESPN)

Leeds are still interested in signing USA attacking midfielder Brenden Aaronson, 21, despite having two bids of up to £20m rejected by Red Bull Salzburg in January. (Athletic – subscription required)

Liverpool are interested in Juventus striker Paulo Dybala. The 28-year-old Argentine is out of contract in the summer. Manchester United, Chelsea and Arsenal are also considering an offer. (Mirror)

Real Madrid are looking at a deal to sign William Saliba, 20, from Arsenal. The French defender, on loan at Marseille, is yet to make a senior appearance under Gunners manager Mikel Arteta. (Express)

Palmeiras’ 15-year-old striker Endrick, having already been linked with both Barcelona and Real Madrid, says all young Brazilian players want to play for Barca. (Sport – in Spanish)

Everton, Brentford and Watford are keeping close tabs on 18-year-old left-back Steve Ngunga, who is impressing with non-league side Rising Ballers. (Football Insider) 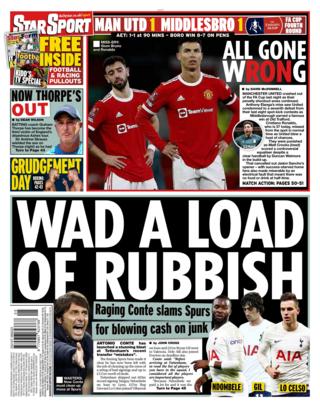