Chelsea defender Antonio Rudiger, 28, says the club will decide whether he stays or goes when his present deal ends in the summer. The Germany international has already received offers to join Real Madrid and Paris St-Germain. (Athletic – subscription)

Newcastle will return to Sevilla in the summer with a fresh offer for their Brazil defender Diego Carlos, 28, who they missed out on in the January transfer window. (Marca – in Spanish)

Paris St-Germain are assembling a lucrative package to sign France midfielder Paul Pogba on a free transfer this summer. However, the 28-year-old has not ruled out staying at Manchester United, with Juventus, Barcelona and Real Madrid also monitoring his situation. (Mail)

Manchester United have added Christopher Nkunku, 24, to their list of summer targets after interim manager Ralf Rangnick urged the club to step up their interest in RB Leipzig’s French midfielder. (ESPN)

Cristiano Ronaldo and several other Manchester United players do not believe Ralf Rangnick has the ability to manage the club and is out of his depth at Old Trafford. (AS – in Spanish)

Rangnick’s personal intervention persuaded Edinson Cavani, 35, to change his mind about leaving Manchester United in January. However, the Uruguay forward will depart in the summer when his contract expires. (Fabrizio Romano)

Manchester City are among a posse of Premier League clubs keen on Barcelona and Spain Under-21 midfielder Nico Gonzalez, 20, who has established himself at the Nou Camp this season. (Marca – in Spanish)

Chelsea and Albania forward Armando Broja, 20, is not ruling out a move away from Stamford Bridge this summer with Arsenal interested in signing him due to his impressive performances at Southampton on loan. (Express)

Crystal Palace fear losing 29-year-old Ivory Coast international Wilfried Zaha for a bargain price as they look to tie down the forward, whose current contract runs out in the summer of 2023, on a new deal. (Mail)

Chelsea forward Callum Hudson-Odoi, 21, is weighing up a switch of international allegiance from England to Ghana, despite having won three caps for the Three Lions. (Mirror)

Serie B side Como and teams in the Greek Super League are interested in signing midfielder Jack Wilshere, 30, who has been training with former club Arsenal and last played for England in 2016. (Football London)

Ivory Coast midfielder Franck Kessie, 25, has not decided which club he wants to join when his AC Milan contract runs out in the summer with Barcelona also now interested. (Fabrizio Romano) 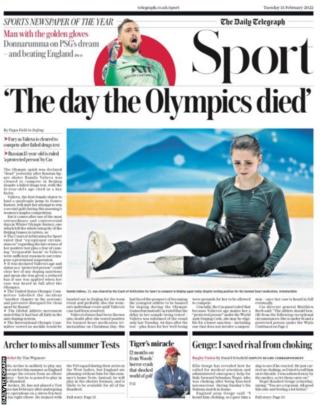 The sport section of the Daily Telegraph