Last summer, Harry Kane was seen by many as the man to make sure Manchester City would retain their Premier League crown. Six months on, though, he may have just blown the title race wide open.

The Tottenham striker did it in style too, with a scintillating solo performance on Saturday night to sink the side who tried so hard to sign him at the start of the season.

Kane would probably have been performing rather more regularly at Etihad Stadium since September had Spurs chairman Daniel Levy not been such an unwilling negotiator when City came to the table.

When he finally made it to the Etihad this weekend, he put on a masterclass that showed exactly why City boss Pep Guardiola had made him his top centre-forward target to replace Sergio Aguero – and why Levy refused to budge on his £150m asking price.

“That’s one of the best all-round centre-forward performances I’ve seen all season, anywhere” is how Alan Shearer described Kane’s display on Match of the Day.

The former England captain added: “Intelligence, aggression, goals, assists, he was just far, far too good for City’s centre-halves Aymeric Laporte and Ruben Dias – and it is not very often we say that. He was just too clever for them.”

Whatever was asked of Kane against the defending champions and league leaders, the current England captain delivered – from his exceptional link-up play to his ruthlessness in front of goal.

Kane managed both for his first goal, starting and finishing the move that saw Spurs go 2-1 up.

It took a brilliant Ederson save and a VAR offside decision to stop him extending his side’s advantage in normal time but, after City looked like they had rescued a point with a last-gasp Riyad Mahrez penalty, it seemed fitting that Kane would have the final word.

He did exactly that with a winner deep in stoppage time, which provided an enthralling game with an incredible ending.

Kane was able to continue his celebrations after the game with the travelling Tottenham fans, who sang “Harry Kane, he’s one of our own” at the final whistle.

No need to ask if Kane is watching this time

The Spurs supporters had aired a very different chant about Kane during their home win over City on the opening weekend of the season.

With the 28-year-old absent after asking to leave the club, and seemingly on the brink of a big-money move to the opposition, they chanted “Are you watching, Harry Kane?”.

This time, there was no need to ask where he was. Kane was doing a lot more than just watching and quite simply was at the centre of everything.

“Part of Tottenham’s gameplan was to keep finding Kane with short passes, because none of the City defenders wanted to drop in with him,” Shearer explained.

“Spurs kept on getting runners forward to feed off Kane and get in behind. His first-time pass to release Son Heung-min for their first goal was absolutely sensational.

“For Tottenham’s second goal, I knew, as soon as Ryan Sessegnon picked up the ball, that Kane was going to score because he spotted the gap and no-one was going to pick him up. Then came the clinical finish.

“It was just incredible to watch. Everything he did was magnificent, including his winner. Say what you want about the defending, and it was rubbish, there was only ever going to be one guy getting on the end of that cross and it wasn’t Kyle Walker.”

Spurs reaped the rewards of Kane’s individual brilliance by ending City’s 15-game unbeaten run in the Premier League and reversing their own poor form to spring one of the upsets of the season.

Kane’s display was something of a surprise too, because this has not been a vintage campaign for him either, certainly in terms of goals. Before facing City he had only scored five times in the league all season.

So, for all sorts of reasons, this was a timely reminder of his class – and his manager Antonio Conte and Liverpool boss Jurgen Klopp would certainly have enjoyed it.

What now for City?

Conte clearly deserves credit for his tactics, but the way City operate with such a defensive high line – all 11 of their players were often advanced deep into the Spurs half – meant the Italian’s favoured approach of sitting deep and flying out on swift counter-attacks always had a chance of getting some success.

Kane was not the only reason it worked so well, but having a world-class player who had a very good day undoubtedly helped.

So, as painful an evening as it was for City fans, especially with the way it ended, we should remember they won’t face a perfect performance like that every week.

It would also be wrong to say a first defeat of 2022 constitutes any sort of crisis for Guardiola and his side.

What it does do is open the door to a dangerous-looking Liverpool side who are on an eight-game winning run in the league and gathering momentum and belief.

The Reds could reduce City’s lead to three points on Wednesday when they play their game in hand – at home to Leeds – meaning Guardiola’s men can ill afford another slip-up when they travel to Merseyside to take on Everton next weekend. 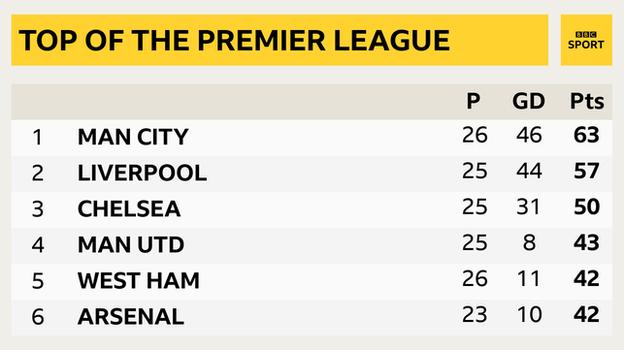 Match of the Day: Alan Shearer looks at ...