Chelsea’s Belgium striker Romelu Lukaku, 28, is willing to take a pay cut to facilitate a return to Inter Milan on loan. (Calciomercato – in Italian)

Lukaku has been angered by suggestions he is trying to exploit the uncertainty at Chelsea over the sanctions on Roman Abramovich and has said he has no intention of leaving the club. (Telegraph – subscription required)

Juventus are targeting moves for Chelsea’s two Italy internationals – midfielder Jorginho, 30, and left-back Emerson Palmieri, 27, who is currently on loan at Lyon. (Tuttosport – in Italian)

Barcelona are also monitoring the Chelsea situation and are interested in two of their Spain internationals – left-back Marcos Alonso, 31, and right-back Cesar Azpilicueta, 32, who is out of contract in the summer. (Mundo Deportivo – in Spanish)

Saudi Media’s bid to buy Chelsea includes plans to redevelop Stamford Bridge and renew the contracts of players such as Azpilicueta and Germany defender Antonio Rudiger, 29, whose current deal is also set to expire this summer. (Goal)

Egypt forward Mohamed Salah, 29, wants to stay in the Premier League if he cannot agree a new contract with Liverpool. (Football Insider)

Paul Pogba’s personal trainer says the France midfielder, 28, will leave Manchester United when his contract expires at the end of the season. (Calciomercato – in Italian)

Newcastle are in talks with English midfielder Sean Longstaff, who is out of contract in the summer, over a new long-term deal for the 24-year-old. (Times)

Newcastle are set to rival Aston Villa for the signing of 26-year-old Leeds and England midfielder Kalvin Phillips. (Mail)

Manchester United could make a move to bring Sam Johnstone back from West Brom in the summer, although Tottenham and Southampton are also interested in signing the 28-year-old England goalkeeper, who is set to become a free agent. (Sun)

Chelsea will do a U-turn to sign on-loan Spain midfielder Saul Niguez, 27, from Atletico Madrid this summer – if UK government sanctions allow them to. (Mirror)

Chelsea have pleaded with the government to lift the ban on them extending player contracts amid fears it could leave them with a major defensive crisis next season. (Telegraph – subscription required)

Manchester United have been alerted to the possibility of Chelsea manager Thomas Tuchel becoming available at the end of the season. (Mail)

Ajax coach Erik ten Hag is ready to become Manchester United manager – and is open to having interim boss Ralf Rangnick alongside him on the bench. (Mirror)

Real Madrid want to keep Croatia midfielder Luka Modric, who is set to become a free agent, for at least another season but the 36-year-old is yet to sign a new contract. (Marca – in Spanish)

AC Milan have reached an agreement with Lille to sign 24-year-old Portugal midfielder Renato Sanches in the summer. (Calciomercato – in Italian)

Juan Mata could be offered a coaching role at Manchester United – if the Spanish midfielder, 33, retires when his contract expires this summer. (Sun) 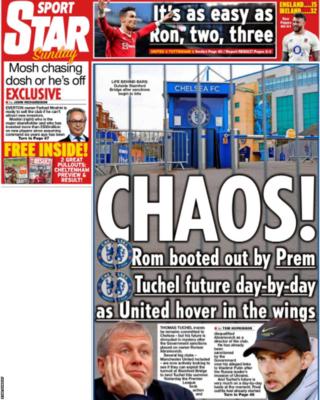