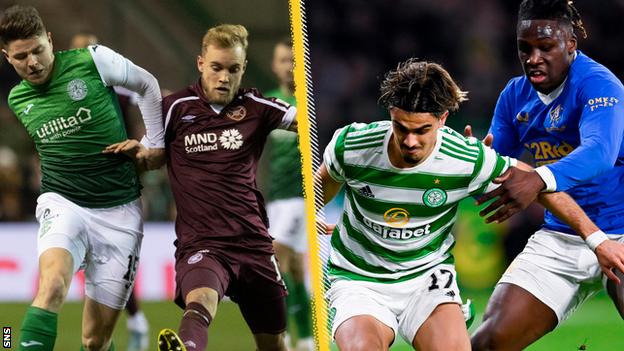 The Edinburgh derby Scottish Cup semi-final between Hearts and Hibernian will be live on BBC One Scotland at 12:15 BST on Saturday 16 April.

The following day, Celtic face Rangers at 14:00, with highlights from the game on BBC Scotland that evening.

Tickets for both matches will range from £8 to £35, with both Edinburgh clubs criticising the pricing.

Hearts and Hibs both say they “stressed that in the current climate we want to make football affordable for everyone”.

The latter added they “understand how much it costs to be a supporter” and “explained this in detail to the SFA” but that the governing body “have not moved on their decision, which is incredibly disappointing and has caused us great frustration”.

It is the first time the Glasgow and Edinburgh clubs have all made it to the last four together.

Hearts beat their Edinburgh rivals 5-1 in the 2012 final and got the better of Hibs in the semi-final two years ago, as well as in 2006. Hibs, the 2016 winners, were beaten in the final by St Johnstone last year.

Celtic, with a record 40 wins in the competition, are aiming for a seventh success since 2011, while Rangers last lifted the trophy in 2009.