Barcelona have reached agreement with Brazil forward Raphinha, 25, over a move from Leeds United this summer. (Sport – in Spanish)

Barcelona are set to release seven players this summer as they look to reinforce, with Chelsea’s Spanish defender Cesar Azpilicueta, 32, and Danish centre-back Andreas Christensen, 25, both linked with moves to the Nou Camp. (AS – in Spanish)

West Ham midfielder Declan Rice, 23, is in the frame as a future England captain, according to Three Lions boss Gareth Southgate. (Mirror)

Premier League clubs are set to be on alert with versatile Arsenal and England international Ainsley Maitland-Niles, 24, not expected to be retained by loan club Roma beyond the summer. (Mirror)

Chelsea have been boosted in their pursuit of Aurelien Tchouameni after the agent of the 22-year-old Monaco and France midfielder denied they have an agreement with Real Madrid. (Le Parisien, via Fabrizio Romano)

Derby County boss Wayne Rooney, 36, says he rejected a move to Manchester United when he was 14 because he wanted to play for Everton. (Sun)

Prospective Chelsea owners have been given a deadline of 11 April to submit final bids for the club. (talkSPORT)

Napoli have set a price tag of £83m for their 23-year-old Nigerian striker Victor Osimhen. (Corriere dello Sport, via Sun)

Norwegian rising star Andreas Schjelderup, 17, says he turned down the opportunity to sign for Liverpool, but the midfielder has left the door open for a potential move in the future. (Liverpool Echo) 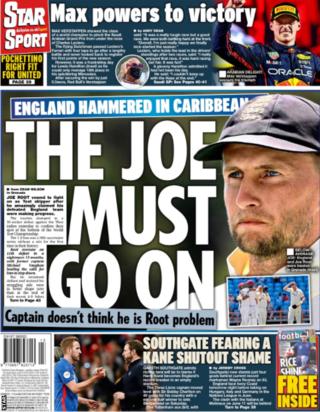