Paris St-Germain are in talks to sign Chelsea striker Romelu Lukaku only a year after the 28-year-old Belgium international joined the Blues for £98m from Inter Milan. (But via Sun)

Manchester United and Arsenal have joined the race for Darwin Nunez after sending scouts to watch the 22-year-old Uruguay striker in action for Benfica over the weekend. (Mirror)

If Nunez leaves, Benfica boss Nelson Verissimo hopes the club will receive close to the £113m they received for Joao Felix from Atletico Madrid in 2019. (Goal)

Borussia Dortmund’s Norway striker Erling Braut Haaland, 21, has dismissed interest from Manchester United because he does not believe they can fulfil his ambitions. (ESPN)

Haaland has not decided between Manchester City and Real Madrid, although it is unlikely he will move to Barcelona. (Marca)

Roma, AC Milan and Juventus have joined West Ham and Newcastle in expressing an interest in signing England forward Jesse Lingard, 29, when his Manchester United contract expires this summer. (Mirror)

Borussia Dortmund are favourites to sign Belgium forward Eden Hazard, 31, from Real Madrid – ahead of Arsenal and AC Milan. (Cadena Ser – in Spanish)

Manchester United are planning on overhauling their midfield this summer with 29-year-old France midfielder Paul Pogba expected to leave when his contract expires in June. (Mirror)

Chelsea have approached Arsenal’s English academy forward Khayon Edwards over a potential summer transfer, with the 18-year-old yet to agree a professional deal with the Gunners. (Goal)

A number of Premier League and European clubs are expected to make a summer move for Chelsea’s 19-year-old English defender Levi Colwill, who has impressed on loan at Huddersfield this season. (Fabrizio Romano)

Spain forward Marco Asensio is expected to leave Real Madrid this summer with AC Milan and Tottenham interested in the 26-year-old. (Mundo Deportivo – in Spanish) 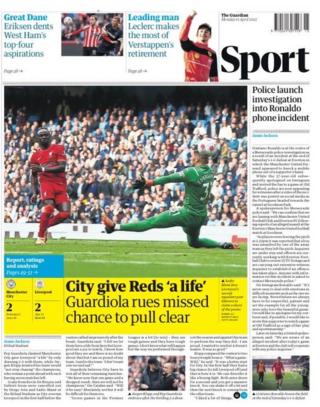 The sports section of the Guardian