Newcastle want to make Brentford’s Christian Eriksen their ‘flagship’ summer signing and will compete with Tottenham, Everton and West Ham for the 30-year-old Denmark midfielder, while the Bees are keen to extend his contract in west London. (Northern Echo)

Corinthians, Botafogo and Flamengo have approached Manchester City captain Fernandinho about a summer move after the 36-year-old’s shock announcement that he intends to leave the Etihad. But the Brazil midfielder prefers a return to his former side Athletico Paranaense. (Globo Esporte)

Manchester City are considering a move for Real Sociedad’s former Newcastle midfielder Mikel Merino to replace Fernandinho, with the 25-year-old Spaniard valued at about £45m. (El Confidencial via FourFourTwo)

Liverpool have agreed to pay striker Mohamed Salah £400,000 a week to persuade the 29-year-old Egypt captain to stay at Anfield. (Metro, via Football Insider)

West Ham have entered the race to sign Bayer Leverkusen winger Moussa Diaby. The 22-year-old France international is also being tracked by Liverpool as a potential replacement for Salah, should he leave. (Liverpool Echo via Calciomercato – in Italian)

Ex-Manchester City and Spain midfielder David Silva is expected to sign a one-year contract extension with Real Sociedad, but the club want him to take a salary cut. The 36-year-old is out of contract this summer. (Mundo Deportivo – in Spanish)

Edinson Cavani could be Manchester United’s secret weapon in signing fellow Uruguay striker Darwin Nunez from Benfica this summer, with forward Cavani, 35, having given the Red Devils a good reference on the 22-year-old. (90 Min)

Both Arsenal and Newcastle are linked with Lyon midfielder Lucas Paqueta, 24. The Brazil international was previously linked with Paris St-Germain and has a price tag of around £58m. (Chronicle)

Fernandez has already held talks with Manchester United and Real Madrid and currently has a release clause of 20m euros (£16.6m). (Express via Cesar Luis Merlo – in Spanish)

Fulham are set to finalise a £6.3m move for 22-year-old Israeli winger Manor Solomon, who has been at the club on loan from Shakhtar Donetsk. (Mail)

West Ham and Wolves will have to pay Sevilla 70m euros (£58.1m) to trigger the release clause of Argentina winger Lucas Ocampos, 27, with the Spanish side eager to extend his contract by one year and increase the release fee to 90m euros (£74.7m). (Super Deporte) 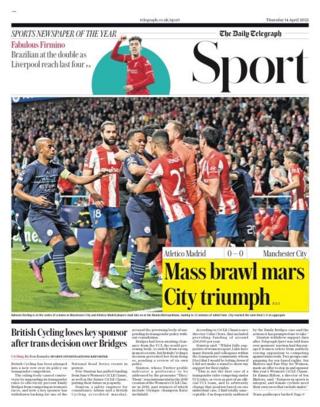