Liverpool and Manchester City produced a thrilling FA Cup semi-final, with the Reds keeping their quadruple bid alive, before Chelsea joined them in the final.

Brentford beat Watford to take another step to safety, while relegation-threatened Burnley regrouped after the sacking of Sean Dyche to claim a welcome point at West Ham.

But what you want to know is, who made my Team of the Week? Check it out below and then make your own selections at the bottom of the article. 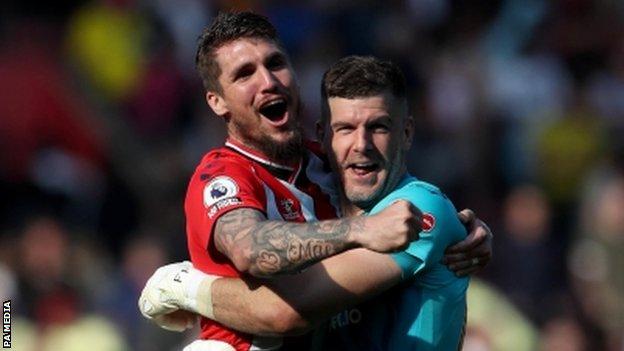 Southampton took a hammering from Chelsea at Stamford Bridge last week but recovered brilliantly to put another dent in Arsenal’s Champion League ambitions. Had it not been for keeper Forster, the scoreline against Chelsea might have been considerably worse and he was superb again for the Saints, making a number of outstanding saves against the Gunners. Forster has been playing well, a point highlighted by his recent selection in Gareth Southgate’s England squad. Arsenal, on the other hand, are starting to look like a team who are running out of steam. I must admit, regardless of where they finish this season, Mikel Arteta has done a much better job than I had anticipated.

Did you know? Forster made six saves in Southampton’s win over Arsenal, his most in a game this season while managing to keep a clean sheet. 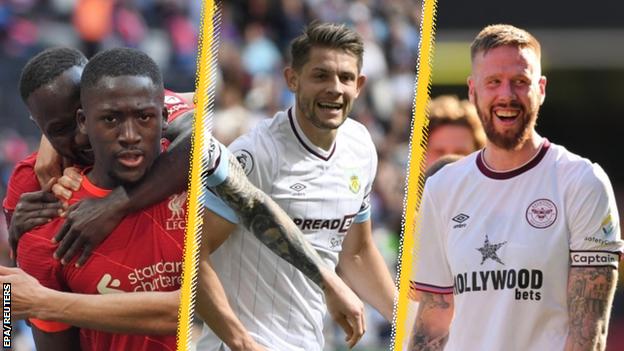 Ibrahima Konate: Three goals in three games tells you all you need to know about the form and attacking prowess of Konate. While everyone is watching Virgil van Dijk on set-pieces, Konate has been cleaning up. The Frenchman has been outstanding in recent games and adds a dangerous element in attack for Liverpool in dead-ball situations. Konate absolutely destroyed Nathan Ake in the air to give Liverpool a 1-0 lead in the FA Cup semi-final. Why Pep Guardiola was prepared to leave Ruben Dias and Aymeric Laporte on the bench when City were already out-gunned by a devastating Liverpool attack was a complete mystery to me. You play your best players in the big games, unless of course, you’re prepared to sacrifice the oldest knockout cup competition in the world for a Premier League or Champions League title.

James Tarkowski: This wasn’t an easy game for Burnley at West Ham. They are in desperate need of points and currently managerless. The sacking of Dyche may have come as a shock to the players, but the way they handled the fixture at the London Stadium suggests they’ve recovered from it very quickly. Burnley, who were without Ben Mee, defended brilliantly for much of the match and had Maxwel Cornet converted his penalty they would have won the match and closed the gap on Everton to one point. Tarkowski was outstanding, while his positioning to clear off the line, with keeper Nick Pope beaten, was superb.

Did you know? Tarkowski made more interceptions (3) and clearances (6) than any other player in Burnley’s 1-1 draw at West Ham.

Pontus Jansson: Something strange has been happening at Watford this season. I have seen good players become a shadow of their former selves. At the back end of last season, and beginning of this, I saw Emmanuel Dennis and Ismaila Sarr playing out of their skins. Slowly the confidence has been drained from them, a feature often caused by constant managerial changes. Brentford, meanwhile, go from strength to strength and seem to have grown in confidence since their impressive 4-1 victory at Chelsea. Jansson scored what turned out to be the winner at Watford in a match played by two very ordinary teams. Fortunately, Brentford have Christian Eriksen, which has made them very watchable.

Did you know? Jansson has scored twice in the Premier League this season, after failing to score at all in two EFL seasons with Brentford (64 games). 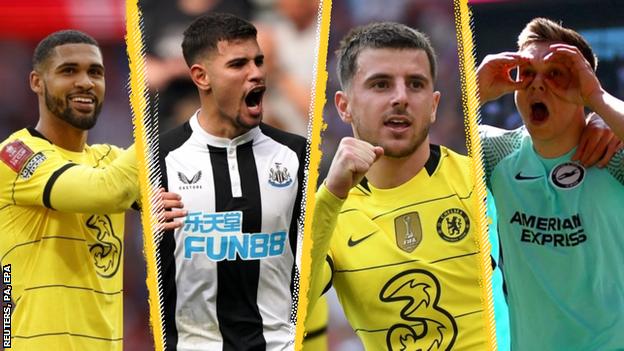 Ruben Loftus-Cheek: What an irony. It’s not that long ago Loftus-Cheek was on loan to Crystal Palace, trying to get his career back on track. I thought he did well while at Palace and might have stayed. However, his return to Stamford Bridge appears to now be proving profitable. I didn’t expect him to start in the FA Cup semi-final but when he got on the pitch he looked the part and took his goal brilliantly. Injuries have not helped Loftus-Cheek make the progression he might have made, but his performance against Palace suggests he is still a talent to be taken very seriously.

Did you know? Loftus-Cheek scored his first goal in any competition since netting for Fulham against Everton in the Premier League in November 2020, while it was his first Chelsea goal since May 2019 against Eintracht Frankfurt.

Bruno Guimaraes: What a result this was for Newcastle against Leicester. The game was going nowhere until Guimaraes refused to give up on a lost cause for his first goal then sprinted 40 yards to get in the box, when the game looked over, for his second. Leicester looked leggy and lacklustre, probably due to their superb midweek victory in Europe. However, they will need to learn how to come back to their domestic programme and be in a position to churn out a draw when not firing on all cylinders. Newcastle’s new owners, meanwhile, need to be congratulated for taking over the club at a difficult time. They have provided stability and been conservative in the transfer market. I don’t know who is advising them, but they are doing one helluva job.

Did you know? Guimaraes’ second and winning goal, scored after 94 minutes and 10 seconds, was Newcastle’s latest Premier League winner on record (since 2006-07).

Mason Mount: From the moment Mount took a touch I knew that his second would result in a goal. Once Chelsea were 2-0 up the game was well beyond Palace. In fact, I thought Chelsea’s approach to this semi-final was extremely professional. It seemed like it was only a matter of time before their experience would tell. As for Mount, his composure in front of goal is getting better with every game. If he continues like this I may have to revisit my suggestion about Frank Lampard’s goalscoring record not being under threat. This kid can score goals.

Did you know? Mount has 12 Chelsea goals this season, with Kai Havertz (13) the only player to score more for the Blues this term. Indeed, Mount is enjoying his best scoring campaign, having surpassed his 11-goal tally for Derby in 2018-19.

Leandro Trossard: Just when you think Tottenham look like a team who have rid themselves of such rampant inconsistency, Brighton come along and remind you that not much has changed after all. Spurs were awful and if they couldn’t win the game they were perfectly entitled not to lose it. Trossard provided a warning last week when he scored against Arsenal and put their fight for fourth place on skid row. To predict Trossard doing the same to Spurs days later would have been a stretch, but that’s precisely what happened. Brighton’s performances under Graham Potter have been extraordinary. Good English managers in the Premier League are in short supply. The big question now is how long can Brighton keep him.

Did you know? Trossard has six goals in the Premier League this season for his best return in the competition, having eclipsed the five he scored in both 2019-20 and 2020-21. 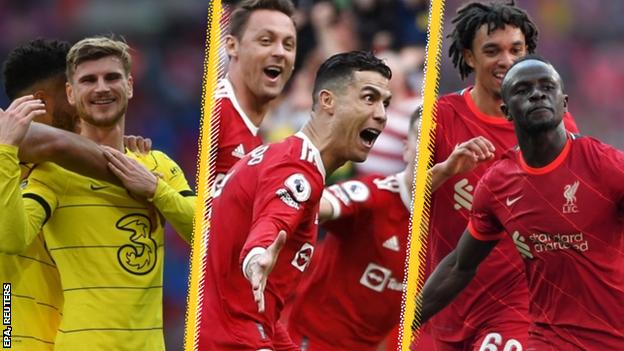 Timo Werner: If ever you want to see how a team recovers from a midweek defeat in Europe, compose themselves and go on to win an FA Cup semi-final, then this was it. Granted, it does help when you have a galaxy of stars to chose from on the bench, but nevertheless this was an impressive display by Chelsea. The star of the show against Palace was Werner and without doubt the most unselfish striker and willing runner I have seen in a long time. Playing alongside the German must be a pleasure when he is in this form. I thought when Werner first arrived at Chelsea he suffered from stage fright. Well if he did, he certainly doesn’t anymore.

Did you know? Werner has been directly involved in seven goals in seven starts in the FA Cup (3 goals, 4 assists), while since the beginning of last season, only Mason Mount (22) has registered more assists for Chelsea than the German in all competitions (17).

Cristiano Ronaldo: Scoring three or four hat-tricks in your professional career must be enormously gratifying, but to score your 50th club hat-trick is just off the scale. Ronaldo’s second goal against Norwich was a glimpse of the player we saw 10 years ago, playing for Real Madrid. The movement and timing of his header was sheer brilliance. I made the point last week, in the Crooks of the Matter, that Ronaldo had been given a wonderful opportunity to retire from European league football this season at the top. Manchester United have provided him with that opportunity and I hope he takes it.

Did you know? Ronaldo scored the 60th hat-trick of his professional career for club and country (50th at club level).

Sadio Mane: The 3-0 half-time scoreline didn’t tell the whole story in Saturday’s FA Cup semi-final – it could have been much worse. Mane, who it would appear seems to be the player most Liverpool fans would have sacrificed for the return of the in-form Roberto Firmino, was absolutely outstanding. Not only was he the only Liverpool forward prepared to put himself about and get physical with City’s defence, but he was once again clinical in front of goal. As for City’s stand-in goalkeeper Zack Steffen, he won’t dangle the ball in front of Mane again trying to be a ‘Cool Hand Luke’ when his feet were incapable of moving as fast as the Senegal international.

Did you know? Mane became the first Liverpool player to score twice at Wembley since Steve McManaman in the 1995 League Cup final against Bolton.

The Crooks of the Matter

I’m all for players negotiating the best contract possible for themselves. However, there comes a point when a negotiation can become a war of attrition. Mohamed Salah’s reported wage demands of more than £400,000 a week, appear selfish and unreasonable.

The Egyptian superstar’s financial requests, should he get them, would smash Liverpool’s pay structure to smithereens and have players in the dressing room at each other’s throats. Why Salah’s contract negotiations should be so widely discussed in the public domain is a mystery to me as it is unhelpful.

One of the more unfortunate aspects of the modern game is that agents often feel the necessity to advertise their client’s availability in order to create an auction environment, which can often make life unbearable for the negotiating club. What’s more, Liverpool would never have tolerated being held to ransom by a player over a contract – or conducted their affairs so publicly – years ago.

The club are quite entitled to argue they made Salah one of the best players in the world and Salah is equally entitled to argue he should be paid in line with his current status. But without Liverpool there is no Mo Salah. There are no record goals, no titles and no awards. He certainly wasn’t going to get any of that with Roma.

Meanwhile, Liverpool fans are acutely aware of the situation, but continue to support their hero even though he’s gone off the boil recently – and that’s because they don’t want to lose him. In the meantime, Salah remains central to Liverpool’s continued success, regardless of all the background noise, and the club remain on course for an unprecedented quadruple.

However, if Salah was to leave at the end of the season over money, as opposed to staying and winning more trophies, it would signal the continuing emergence of a horrible trait that could, in time, be the game’s undoing.