Chelsea kept the Women’s Super League title race in their own hands with a nervy win at Birmingham.

Without a shot on target in the first half, Chelsea improved somewhat in the second but struggled to make their chances count.

The Blues – who have one game left – have a four-point cushion over Arsenal, who have two to play.

“It’s one of those games where you know it’s going to be tight and you hope you get the early goal. And when you don’t, the opponent gets buoyed.

“But job done – Pernille Harder has composure in the biggest moments and I’m delighted.”

Birmingham, meanwhile, are five points adrift and need to win both of their remaining games, against Manchester City and Aston Villa, to have a chance of avoiding the drop.

They have already played a part in this title race with their 2-0 win against Arsenal in January and looked as if they could cause another upset for three-quarters of this match.

Birmingham defended diligently and pressed throughout, only allowing the WSL title holders a handful of chances.

The visitors came close in the opening minutes when Sam Kerr hit the bar and Harder fired wide, but after that they looked lacking in the final third.

At the other end, Chelsea goalkeeper Ann-Katrin Berger sometimes seemed unconvincing at set-pieces but her side managed to keep Birmingham at bay.

Hayes’ side have struggled somewhat in recent fixtures and only edged past Spurs when the two met on Thursday.

But they managed to get that game over the line and did so again on Sunday, as Harder scored from the spot after Lisa Robertson handled the ball.

Birmingham came close in the dying minutes of the game, but a fingertip stop from Berger kept out Emily Whelan’s shot from the edge of the box and secured the win.

Manager Darren Carter said he didn’t have “too many qualms” about the penalty decision but he was “gutted that it’s cost us at least a point”.

He added: “To lose the game on a penalty, and then to have a couple of chances at the end – we’re gutted, because I think there was something there for us.”

The WSL title remains in Chelsea’s own hands going into their final fixture next Sunday, at home to Manchester United – and they will be champions before then if Arsenal lost at home to Tottenham on Wednesday. 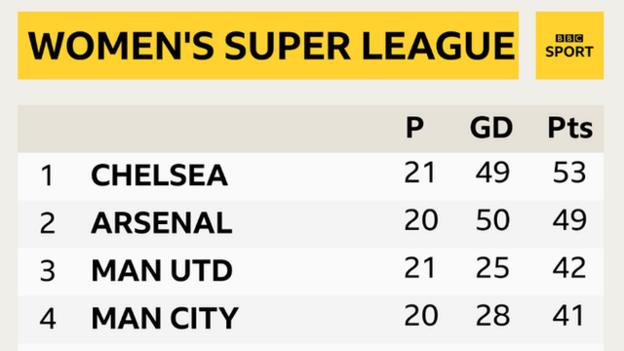 Match of the Day 2 analysis: Could Richarlison ...