League Two: Title, promotion and play-offs still up for grabs on final day

League Two: Title, promotion and play-offs still up for grabs on final day

If so, then the final day of the League Two season is the place you want to be this Saturday afternoon.

BBC Sport takes you through what could happen.

If you think Manchester City supporters have it tough after their side’s 14-point lead over Liverpool at the top of the Premier League has been cut to just one, spare a thought for Forest Green Rovers fans.

After their 1-1 draw at Sutton United on 12 February they were 11 points clear at the top of League Two and absolutely flying.

Title rivals Exeter at that stage were 16 points behind them with a game in hand – but what has happened since has been remarkable.

Since the start of February Exeter have won 13 and drawn four of their 19 games, while Rovers went a whole month without winning and have just one victory in their past six matches.

It means there has been a 17-point swing in favour of the Devon side, who are now a point clear of Rovers.

It’s the second great stretch of results Exeter have put together this season – a club-record 19-game unbeaten run from mid-August to mid-November was only marred by seven draws in the league that kept them away from the top spot.

“We’d kind of resigned ourselves to the fact that ourselves and the majority of the rest of the league were playing for second and third place,” Exeter manager Matt Taylor told BBC Sport before his side’s home game with a Port Vale side that can still claim the third automatic promotion spot.

“Forest Green might say they’ve had a bit of an indifferent finish to the season, but their job was probably done a couple of months ago in all honesty, they were that far ahead, they only needed a few more points to guarantee promotion.”

Having been top for so long Forest Green know a first-ever English Football League title to go along with a maiden promotion to League One is out of their hands.

They must hope Exeter fail to beat Vale and they draw or win at Mansfield, another side that could finish third.

“In terms of results, it has been tougher over the last few months,” Forest Green manager Rob Edwards told BBC Sport.

“I do think there’s reasons why and I do think one of them is a psychological side where it’s tough – and we’ve seen that up and down the country in all the leagues, how difficult it is to achieve something and get over that line, and we have done it.

“So I don’t think we should be too critical. But definitely we’ve got to make sure that we learn and we’re better going into next season.”

Five into one does not go 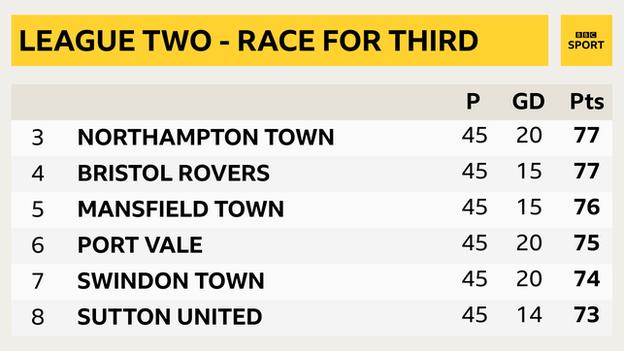 While the title race is pretty simple, who gets the third automatic promotion place behind Exeter and Forest Green is anyone’s guess.

On paper you would say Northampton are the favourites – they travel to a fourth-from-bottom Barrow side with nothing to play for and boast a healthy five-goal advantage over Bristol Rovers.

“It’s going to be a hell of a tough game up there,” Northampton boss Jon Brady told BBC Radio Northampton.

“I feel with League Two, the teams are very, very even and it is unrelenting. It has been exactly that way throughout the whole season, so for any teams up and around the top 10 have done fantastically well because it’s such a tough league.

“Some people, without that context and without being on the inside, don’t understand what it takes in a 46-game season to keep the output high and consistency levels strong. To be in that top 10, you have to be consistently very strong, your players have to be super fit and super committed.”

But should the Cobblers slip up all bets are off.

Rovers host bottom-of-the-table Scunthorpe, so on paper a win should be straightforward against a side who have tasted victory just four times all season and just once away from Glanford Park.

But you would think Scunthorpe’s players will want to go out of the league on a high, so it might not be as simple as it seems for Joey Barton’s men.

Should either side slip up then Mansfield, Port Vale or Swindon could all strike.

“Somebody is going to miss out, I just hope it’s not us,” Mansfield manager Nigel Clough told BBC Radio Nottingham.

“It’s unbelievable how it’s worked out on the final day. It’s as exciting as any league in the country at the moment.

“Let’s just do our job, a point or three will guarantee a play-off spot. That’s all we need to focus on.” 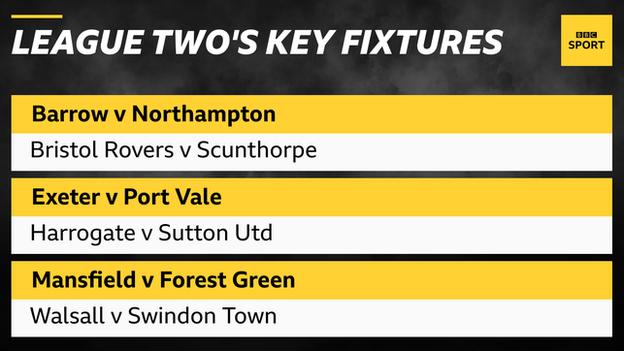 The Stags and Valiants have tough games against the top two, while seventh-placed Swindon, who are on a run of four wins in their past five games, travel to 15th-placed Walsall.

So could Swindon – who only had a handful of players at the start of pre-season before a takeover by Australian businessman Clem Morfuni in July – win for a fifth time in six games and claim an unlikely promotion place?

To do it they would need to win in the West Midlands, hope Northampton and Bristol Rovers both lose, and that Mansfield and Port Vale drop points.

Can Sutton and Tranmere make the play-offs?

A year ago Sutton United were celebrating after claiming the National League title and entering the English Football League for the first time.

Their first season in the top 92 has already seen them reach Wembley where they suffered a heartbreaking extra-time loss to League One side Rotherham United in the Papa John’s Trophy final, but they could return to north London again.

The south London side travel to 17th-placed Harrogate knowing they must win and hope Mansfield and Port Vale both lose and Swindon drop points.

And should any of the sides from Port Vale down slip up then Tranmere could find themselves in the mix – victory at mid-table Leyton Orient along with losses for Port Vale and Swindon, and Sutton failing to win, could see them take seventh place.

“It is a unique situation, a situation I’ve not been involved in before with so many teams on the last day of the season, but it’s plain and simple for us, we’ve just got to go and beat Harrogate,” Sutton manager Matt Gray told BBC Radio London.

“If we go and put three points on the board, we go and get 76 points. I don’t know exactly my stats but I know it hasn’t happened for eight or maybe 10 years or even longer that a team who’s finished with 76 in League Two hasn’t got into the play-offs.

“If we get 76 and we miss out, we’ve done everything possible and we’ve had an unbelievable season and put an amazing points tally on the board.

“But if we can put 76 points on I still believe that we’ve got every chance of getting into the play-offs.”

Whatever happens come late afternoon on Saturday, it promises to be an exciting end to the season – just make sure you have your calculator on standby to work out all those permutations.